For the beginning of the day, we left the our Best Western, went to church, and saw a historic cemetery! 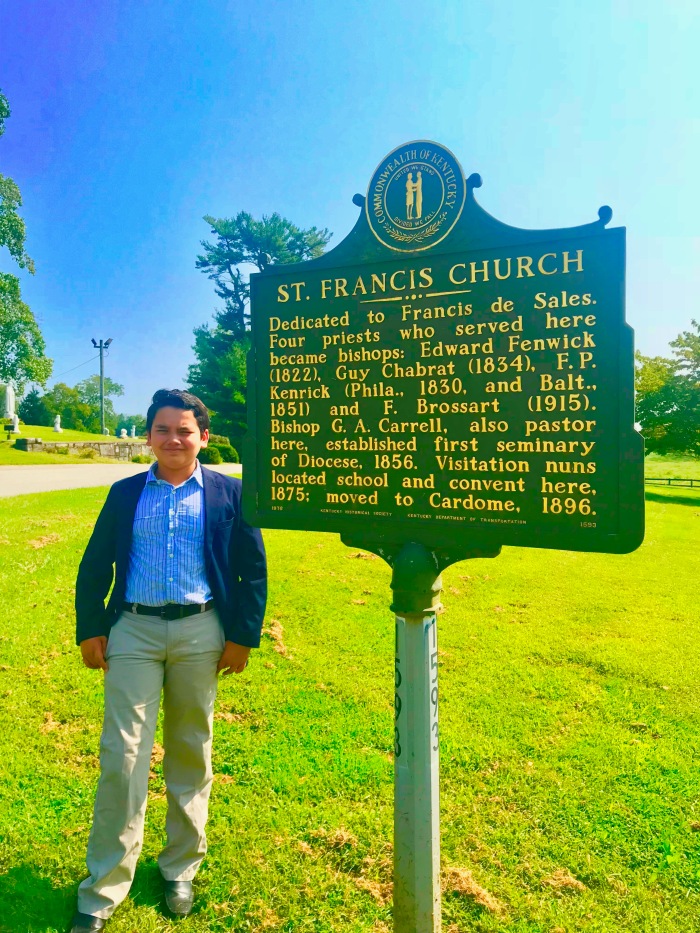 After going to Sunday mass, we checked out the historical cemetery known as “St. Francis Cemetery”!  The cemetery includes dead people who died during the American Revolution, the American Civil War, and the 20th century! 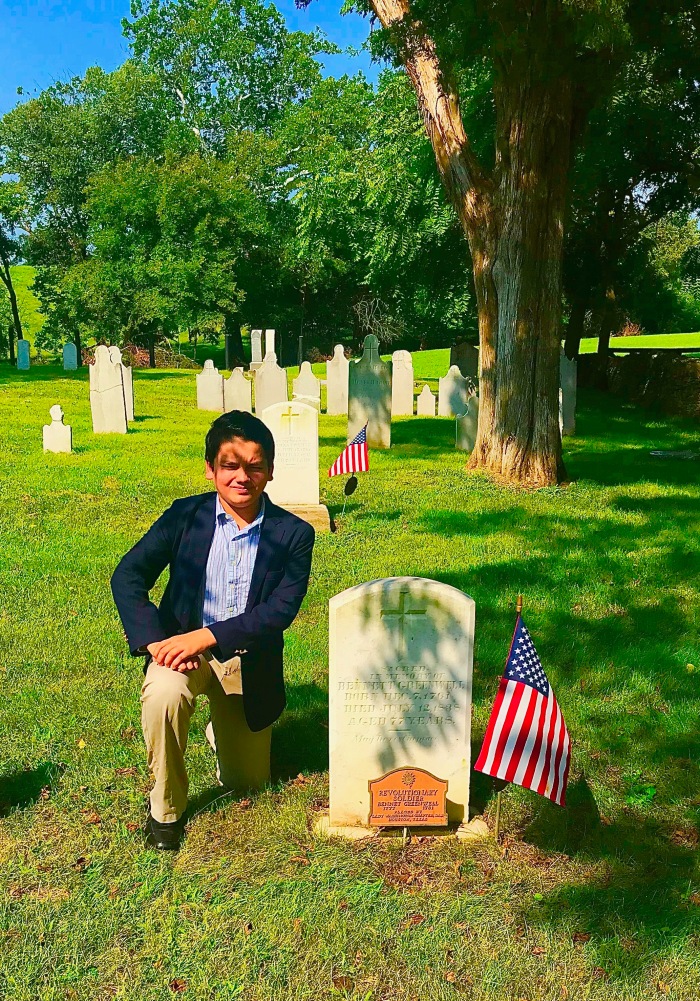 After seeing the cemetery, we drove as Texas roadies to the great town of Frankfort (the capital city of Kentucky)! 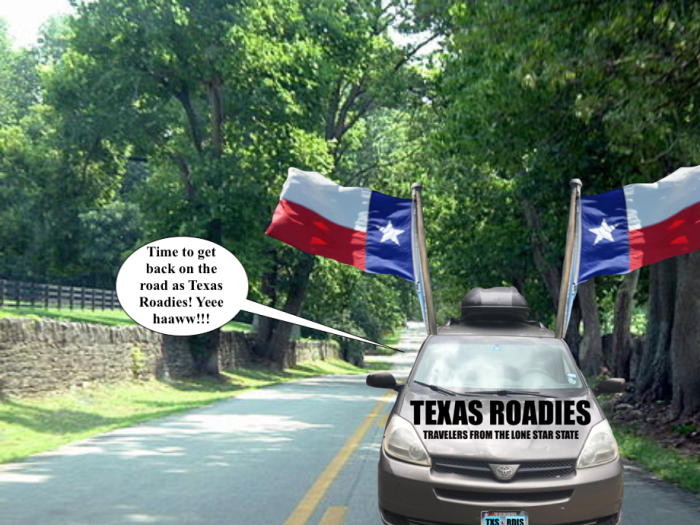 We’re always back on the road!!!

In Frankfort, we explored the capital, the old capital, the governor’s mansion, and a garden-like time clock!!! It was quite unusual to see a town be the place for a state capital because almost every state capital is in a city!!!! They were very cool to see!!l

At the steps of power! 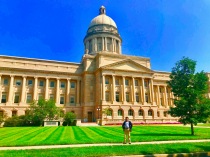 The capitol of Kentucky! 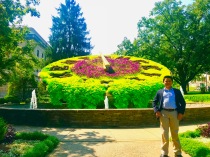 “What the dunk in the dunking world is going on!?!??! There is a clock here made out of plants!!”–Julian 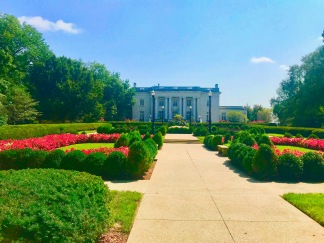 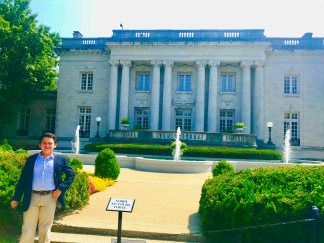 A huge pot of flowers! 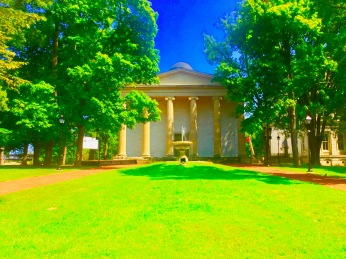 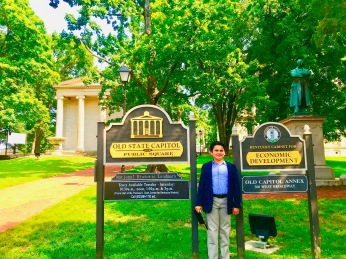 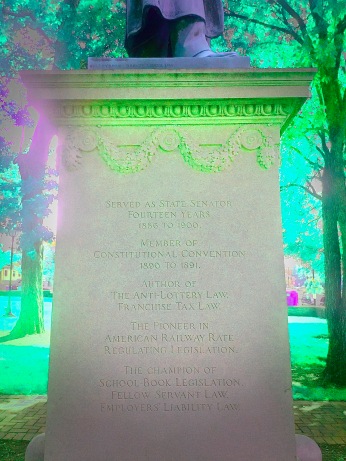 The legacy of a dude who was a governor for Kentucky!

A view of Frankfort! 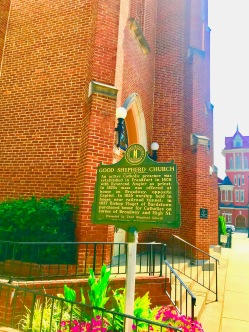 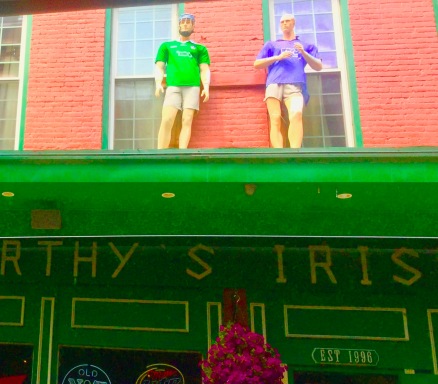 There is 2 dudes on a building and nobody is calling 911!! 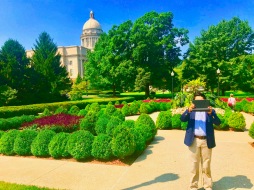 After Frankfort, we drove Lexington! Lexington, Kentucky was a nice medium-sized city!!! 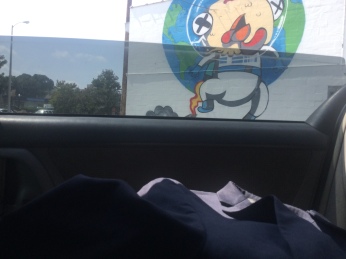 A strange chicken in a astronaut suit with earth in the background!!! Who the dunk would do such a strange cartoon!!!

For lunch, we ate at a restaurant (in Lexington, Kentucky) called “Carson’s Food And Drink” (the restaurant looked like a super fancy restaurant out of the 1920’s)! At Carson’s Food And Drink, Dad and I split the delicious “Cowboy Ribeye”(🥩🤠) which includes a 18 ounce ribeye, seasoned fries, bourbon mushrooms, onions, and finished with house truffle butter (I ate mine with a side of smoked Gouda Mac & Cheese)! Max ate the delicious “Carson’s Chicken Fried Chicken” which includes buttermilk marinated chicken breasts breaded and fried on a bed of garlic mashed potatoes, haricots verts, pork belly sage gravy, and pork belly! I’ll give this restaurant a Texan A+! 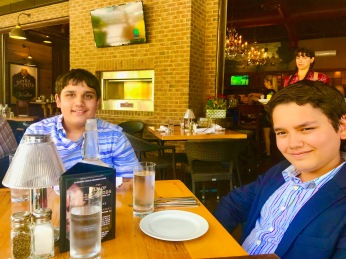 We are dunking waiting and there is still no food!!!!! Aaaaarrrrhghghgghhghg!!!!!!!!

After lunch, dad gave the waiter a BIG-FAT-BEAUTIFUL-YUGE check that was close to the size of Donald Trump, and drove back on the road as Texas roadies driving through the rural outskirts of the American way into Morehead (a decent town in Kentucky)!!! Yeeeeeeee haaaaaaaaaawwww!!!!!!!!!!! 🤠🇺🇸🏇🏻🚗

If weren’t for these cows, how would we be able to eat burgers, steak, sausages, BBQ, cheese, and plenty of meat!! Thank these cows before ya eat meat and drink or eat dairy! All hail carnivore America!!!!

On the way to Morehead, we stopped by Winchester (a neat conservative town in Kentucky)! The town had lots of class, prosperity, safety, and tradition!! 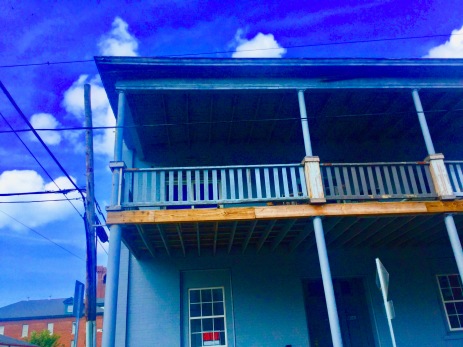 An old building that does need fixing! 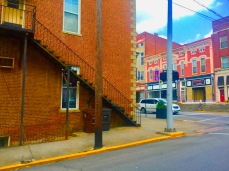 Close to the main street! 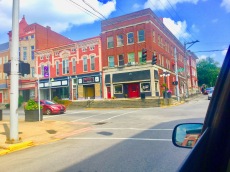 Across this country is this town!!! 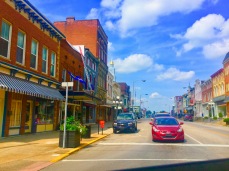 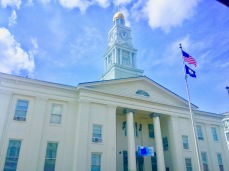 At Morehead, we stayed at a Best Western (what is a Best Western doing in eastern America?), watched Fox News (real news), and ate some cracking good food inside of a barrel for dinner!!!

For dinner, we ate food at a Cracker Barrel (a restaurant chain very popular in southeastern America)! At Cracker Barrel, max and I ate the delicious (😋) “Chicken n’ Dumplins” which includes chicken tenderloins, and freshly prepared dumplins (max and I had a side of Mac & Cheese to go with our dish)! Dad ate the delicious (😋) “Farm-Raised Catfish” which includes 2 American Farm-Raised Catfish fillets that are cornmeal breaded and fried!! If you wanna taste very delicious food in Southeastern America, go to Cracker Barrel!!!!!!! I’ll give this restaurant chain a Texan A+!