For the beginning of the day, we watched Fox News, left the Motel 6 in Akron, and drove to a burger restaurant (as Texas roadies)!

We’re coming for our burgers!!!!

For lunch, we ate delicious double cheeseburgers (in Akron, Ohio) from a restaurant called “Bob’s Hamburg”! (famous since 1931, during the Great Depression) The restaurant had a very retro atmosphere, dirty bathroom, delicious food, and dunking weirdos!!! For improvement, I say clean the bathroom and draw away dunking weirdos from the restaurant! 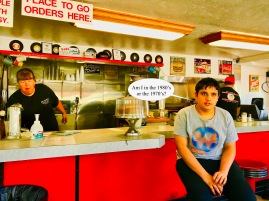 “I got my burger, coke, and blog device (the iPad)!”–Julian 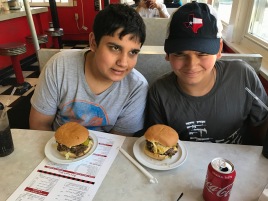 He has felt the power!!! 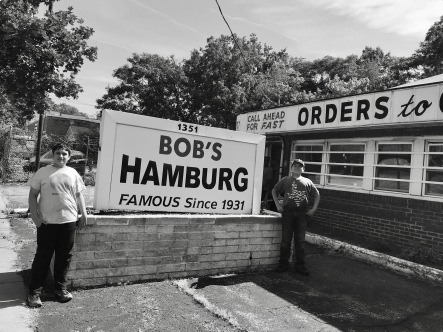 After eating lunch, we drove to Columbus (the capital of Ohio)! At Columbus, we checked out the capital (the capital was rather unusual because there was no dome), saw monuments, a theater, and a great statue of William McKinley (1 of America’s greatest presidents)💪🏻🇺🇸! Columbus was definitely worth the ride!

What an interesting theatre

A view of the downtown!

The Texas Giant with William McKinley! 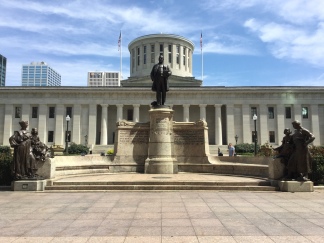 Will at the capital! 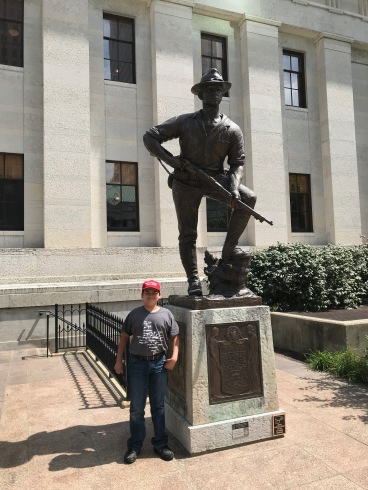 The Texas Giant with a war hero memorial!

The hero defends the city! 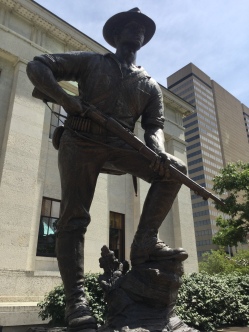 The hero comes on his guard!

Another look from the downtown

The Texas Giant with Christoper Columbus!

The capital and the city!

After Columbus, we checked out Dayton (a Ohio town)! Dayton, Ohio looked poor with buildings falling apart, people resorting to crime (not everyone), lack of class in clothing (not everyone), and a lack of prosperity! There definitely needs to be some draining of the swamp!!!

The downtown must be upgraded!

These people seriously need to wear some better clothes!

After seeing Dayton, we drove to Cincinnati (the 3rd largest city in Ohio)! We stayed at a Motel 6 (which included lots of trucks, a man being arrested, 4 shirtless dudes, assumable gang bangers, and a man with no arm) in Cincinnati, watched Fox News, and ate dinner! The Motel 6 was really worth the knowledge to see.

For dinner, we were going to eat Cincinnati chili at a restaurant called “Camp Washington Chili”, but the customers looked like weirdos, the service was poor (the people who served the food looked like meth heads), my dad has made dishes similar to it, and there was a insulting picture of George Washington posed as a freak close to the restaurant!!! Instead of Camp Washington Chili, we ate delicious Chick-fil-A sandwiches and fries with cookies & cream milkshakes (Dad didn’t drink a milkshake) while watching Fox News in our Motel 6 room!!!

Why is Max smiling over this insult against America’s first president?!??!?