In the morning we drove to an ancient Greek temple located in Segesta.  Sicily is said to have some of the best Greek ruins outside of Greece.

Since the sun was just coming up when we arrived in Segesta, the scenery was absolutely incredible. The temple stood majestically on the top of a hill.  It is amazing to think of all the people who have looked at this temple throughout history, and all of the people who will look at it in years to come.

Our next stop was Trapani . We had read about the world’s best cannoli found in Trapani.  We expected Carlos’s Bakery style lines (The Cake Boss).  We love food, so we are ready for the best cannoli!

The bakery was very hard to find, and it ended  up being a  kitchen and one baker.

No shop or lines. We walked into the kitchen and asked for five cannoli’s. The baker then pulled out the shells and fresh ricotta filling, and filled the cannoli’s right on the spot.

They did not disappoint either! The filling was just like ice cream, and the shells were much better than your standard ice cream cone. They were so good that we had to walk back for five more. 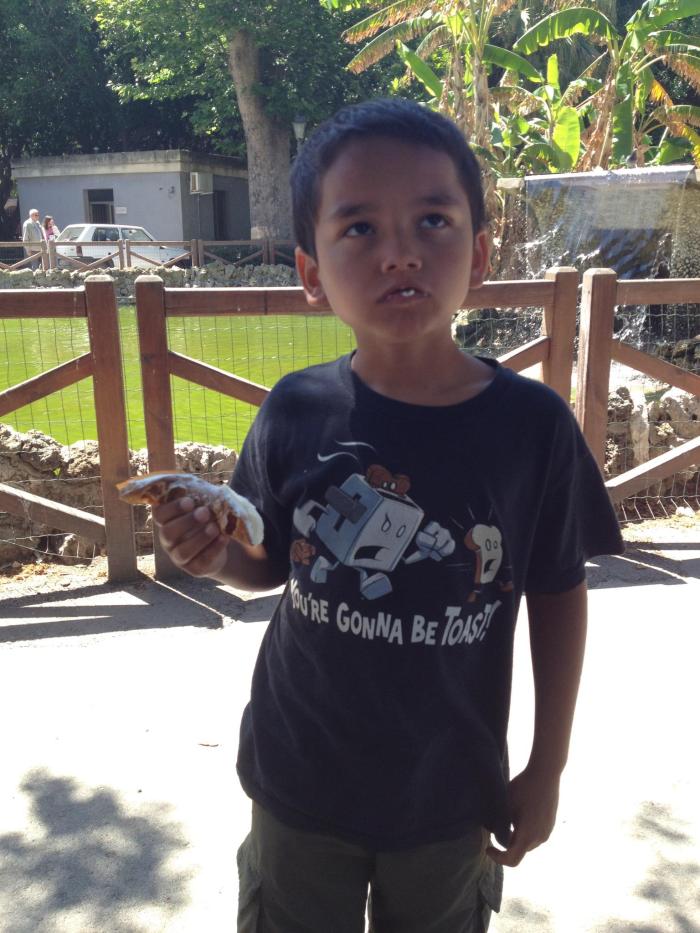 too pretty to eat…but we must

We spent the rest of the day driving towards Mt. Etna, stopping  in the Valley of the Temples. Dad thought that the temple at Segesta had more impact because it was alone on the hill. The temples in the valley were not as well maintained and were packed with ruins.

That night we stumbled across an “American Grill.”  Thrilled, we sat down and ordered burgers and tater skins.  Once the food came we realized that these people had (contrary to all the posters) never been to the United States.  Anyone who visiting the United States knows that we pride ourselves in large servings….hamburgers are big and juicy, with lots of yummy toppings.  The hamburgers at the “American Grill”  were the width of two nickels.   Minuscule?  I would say so.

I guess we learned that in Italy it is best to stick to Italian food. 🙂