Started the day with a drive into Rome to take care of laundry. We stopped at the TI desk in Termini station to ask for directions. Following the directions, we drove very slowly looking for the lavanderia. After going about two blocks down the street we stopped to ask for more directions at a hotel. In broken English, the manager told us, “Just a little further down the street.”  Driving “a little further down the street”  we proved the manager wrong.  We drove down a few more blocks, and realized the street was coming to an end. No lavanderia in sight! I decided to ask for additional directions in another hotel. This time, the manager drew a map showing the lavanderia in a back alley around the street! Lovely!  Miraculously, Dad found a parking spot and we found our way to the back alley lavanderia. The family who runs the lavanderia was sitting inside doing laundry.  As we neared they greeted us with, “No laundry till Monday.” Wait … what? No laundry till Monday! After all that driving and searching! Thank you TI!  Well, at least we can find the place on Monday.

No laundry…more time..so we headed to the Roman farmer’s market. It is a long walk from the metro, and at first it looks like a few food stands under a tent.  Then we spot a meat stand where a lady is carving up a boars head and making sandwiches!  We decided to try it. After a lot of sign language and dad speaking Spanish, we convinced her that we wanted five sandwiches, not seven.  We took our loot for a picnic at a nearby park. The sandwiches are fabulous! They taste like shredded pork chops in a baguette.

That evening, we rode the metro to the Spanish Steps, and walked to the TreviFountain. We stood admiring the fountain, and taking pictures. 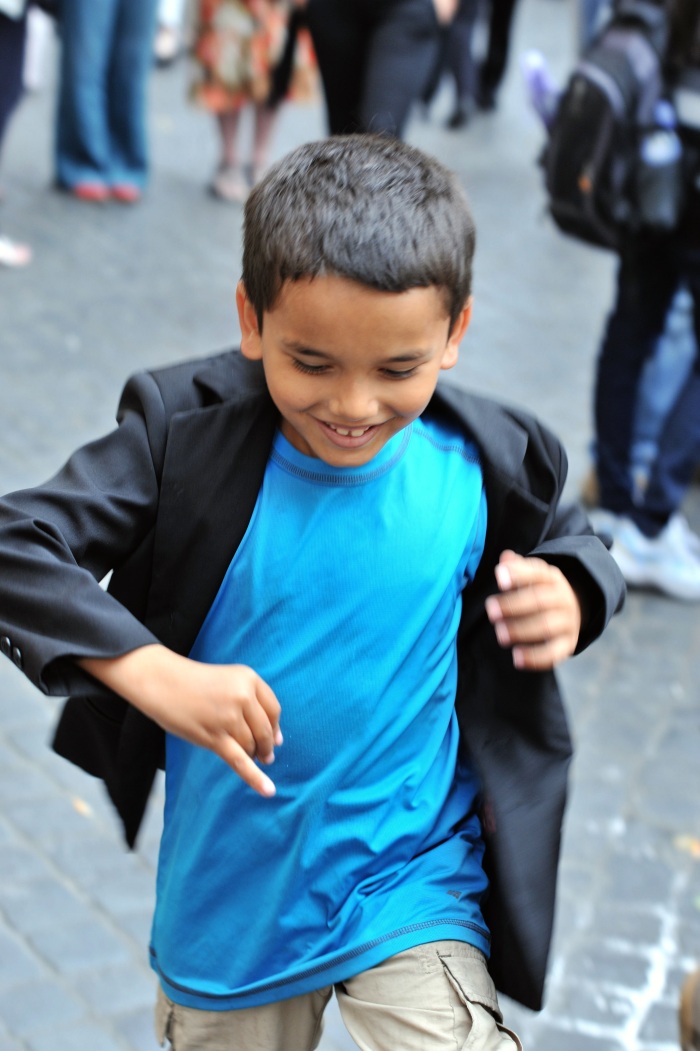 As we started walking to the Pantheon the rain came down. Fortunately there was a beautiful Greek Orthodox Church located across from the Trevi Fountain. Shelter!  We took cover in the church until the rain died down. 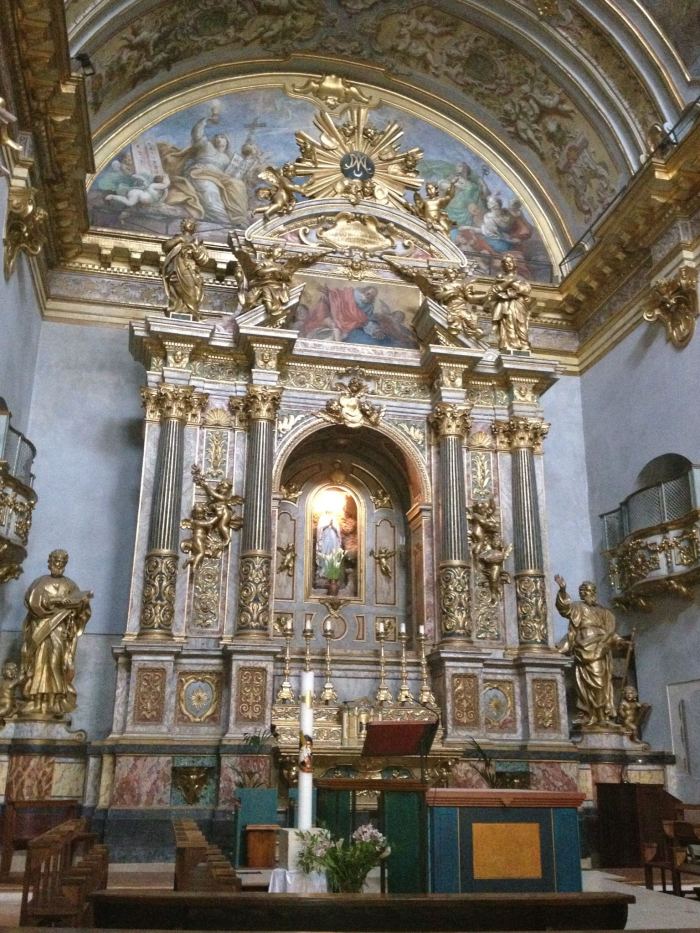 The Greek Orthodox Church across from the Trevi Fountain 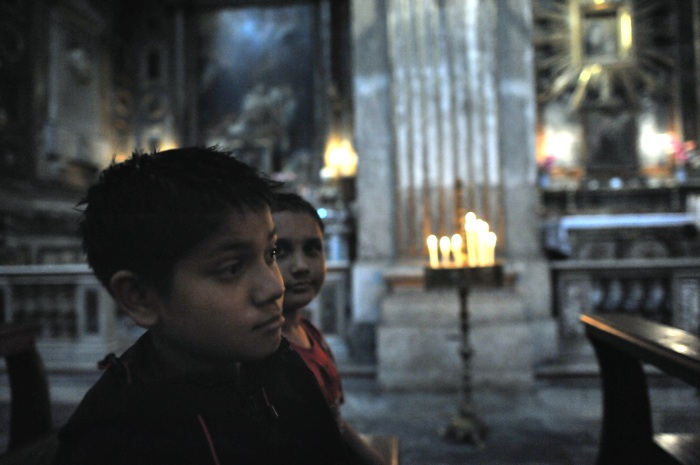 Shelter in the Sanctuary

We intended to continue on our walk, but instead ended up lounging in front of the church, just watching people rush by the fountain with their umbrellas as it got dark.

After an hour the priest finally told us it was time to close up.  We took a shorter walk to Campo Fiori, and found a delicious restaurant called Costanza’s. For an appetizer, they brought us foie gras with mascarpone cheese spread, and bread. All their pastas were fresh, and they made a fabulous veal piccata.

On our way to get gelato, we happened to walk by the Pantheon at night. It was magical!  The columns, the fountains, the history and all the life surrounding it! 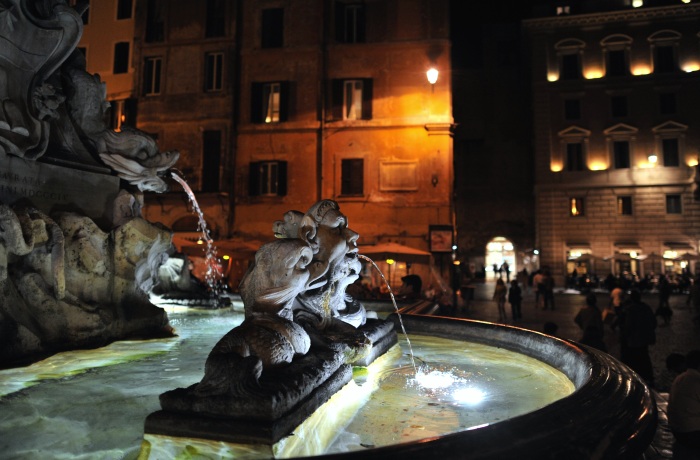 Fountain by the Pantheon

We ate gelato that night at the best gelato bar in Rome. It’s called Giolitti, it’s set up like an old fashioned candy shop, and they give us very generous scoops. I had a mix of caramel and Baileys in a chocolate covered cone.

Natalia and her gelato 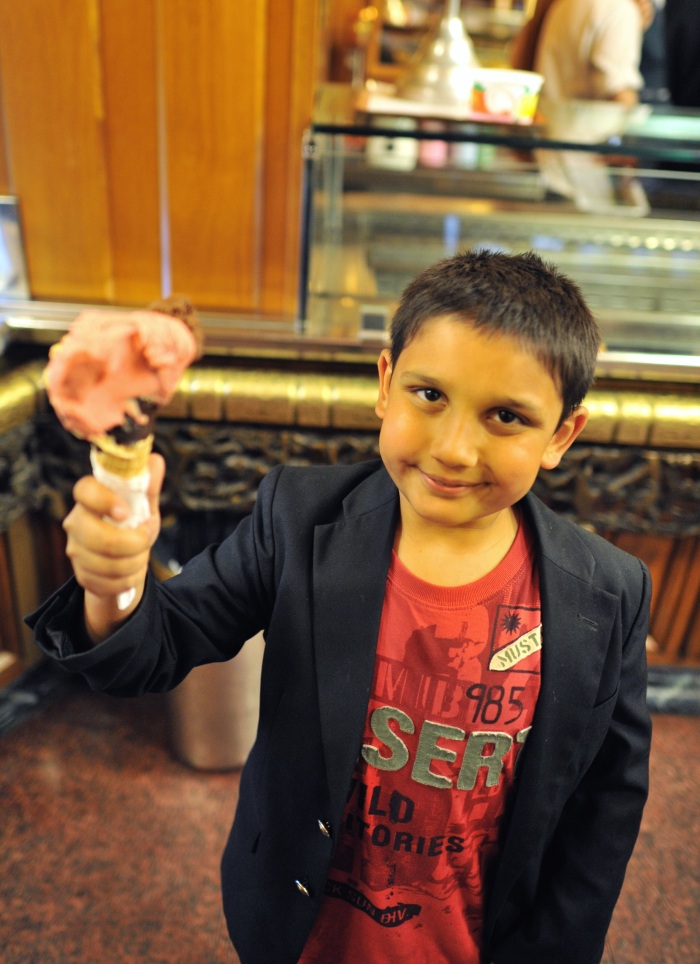